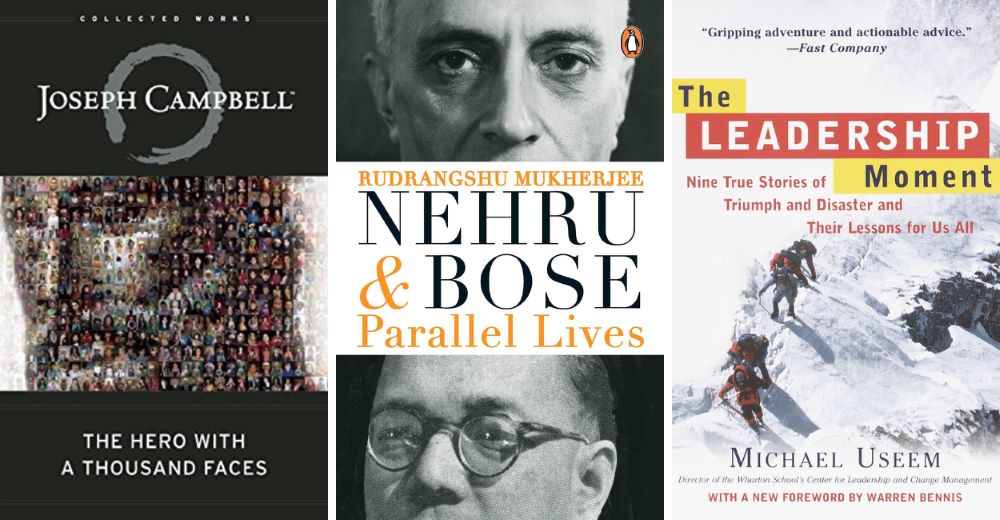 For as long as we’ve known K Ramkumar, we’ve heard him talk passionately about books and biographies of those who shone in moments of crisis.

He is the founder and CEO of Leadership Centre, an institution dedicated to building world-class thought and practice in leadership consulting.

So who better to ask for recommendations on books on leadership?

Leadership manifests through human beings, though it gets attributed to one person, says Ramkumar. A succession of individuals creates an institution.

With that in mind, he recommends 7 books on leadership. Each recommendation is accompanied by an audiogram from Ramkumar where he explains why he likes that book.

While you can certainly listen to this list in any order, we recommend you listen to it in the sequence presented—for that itself tells a story and argues a certain point of view.

But before that, listen to his introduction to this list.

Leadership is a concept that plays out through individuals… it is not that there are a few gifted people. Leadership is triggered or demanded by a certain context. Otherwise it’s a myth.

We hold leaders in a mythological way—their characteristics are always noble. Real human leaders are shaped by the context and are in turn shaped by it. Where do these leaders bubble up from?

And is there more to leadership than people? Should it be seen through the lens of intent than through success and failure?

On to the recommendations

1. The Hero with a Thousand Faces - Joseph Campbell

We want all our leaders to have a thousand noble characteristics. Joseph Campbell examines the myths of multiple civilisations to bring a wonderful book which is deep in psychology, which examines this quest we have for God-like leaders.

He examines [the myths of leadership].

For example, the Ravana myth: he is a rakshasa, a devout Shiv-bhakta, a Rudra veena exponent, and grandson of Pulastya [one of the ten Prajapati or mind-born sons of Brahma]. Who is Ravana—is he noble or ignoble?

Or the Dhoni myth, the Bill Gates myth, the Warren Buffet myth, the Jeff Bezos myth.

Read this book and put into perspective the way we burden our leaders with myths.

This book is about four American presidents: Abraham Lincoln, Theodore Roosevelt, Franklin D Roosevelt, and Lyndon B. Johnson—spread over 100 years. Four people who were not born to be leaders. They were full of vulnerability, both physical and mental. In a world where disability is seen as weakness, they straddled the history of the US during a critical period, and left a long legacy. A must read at a time where a leader is supposed to have no weakness.

This book is actually about three people. It’s a researched book about the lives of two outstanding modern-day leaders who have shaped the Indian ethos. Both were friends during their lifetime; both were socialists, though modern propaganda will have you believe otherwise; and both looked up to a third person, MK Gandhi, as a mentor. They are like Arjuna and Eklavya with Drona.

It is interesting to look at leadership through people who look up to their inspiration.

A book about Dwight D. Eisenhower, by his son—but this is not a eulogy.

Very few people have in their lifetime straddled two domains and have contributed to a larger world. As a general, he was a harmoniser and integrator of conflicting and competing interests [during WWII]. In 1950 he was elected as US president, when former allies became adversaries as the Cold War started and the US was ravaged by war. But 10 years later, the US became the most dominant force.

This recommendation might make you wonder if you are listening to the right person and whether you should take any of my recommendations seriously!

Jeffrey Pfeffer explodes leadership myths. He’s not strident, but constantly challenges the idealism of leadership. He presents the dilemmas leaders go through in their values. He says if they were to live up to all their values, they could actually cause harm. He challenges you to look at leaders with pragmatism.

In this book Michael Useem presents the most influential thought that I have listened to: That there are no 24/7 lifelong leaders. We, at moments, rise above ourselves and address the needs of a particular context. The rest of the world then looks up to them as a leader. These are stories of people whom you’ve never heard about—and some of them failed. So do you measure leaders through intent or through outcomes?

This is the way I want to look at leaders.

7. Leadership on the Line - Ronald Heifetz and Marty Linsky

The two Harvard professors who co-wrote this book, say we confuse two processes: management and leadership. We use them interchangeably, and even select those who distinguish themselves in management to leadership.

Neither is superior. But leadership is about preparing for the future; management is about clarifying, sourcing and harvesting the present. Management is the platform that helps you launch leadership. But very few excel in both.

Read this book to examine yourself whether you are preparing yourself to exercise leadership, or are you plateauing as a manager. If you are already in leadership, are you focusing sufficiently on being an effective manager? I’m also saying this for your [role in] your own family.

Seven books to whet your appetite on the ocean of leadership? These are just books I put together to initiate you on your quest for leadership.

Popular myth will make us believe that the pursuit of leadership is about personal ambition. But others will partake in your quest [based on] the way it shapes the institution you belong to. And no one individual can shape an institution. Be it NASA or ISRO or even the US.

So, enlarge your lens of leadership from “I” to institutions that outlive the individuals who helped build and shape it.