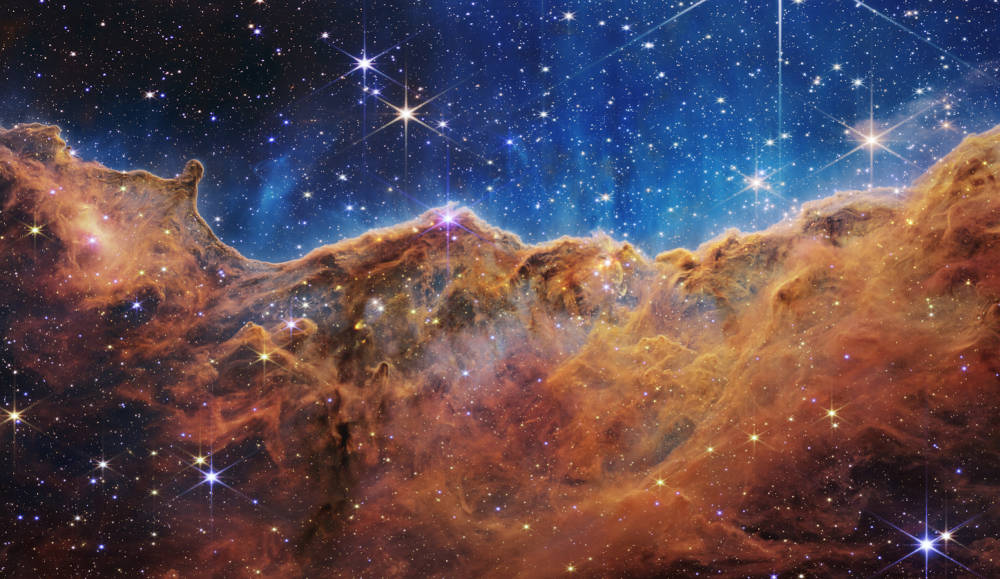 [An image of the Carina Nebula, a cluster where matter forms into stars. Photo from NASA]

It’s $9 billion over budget, and 14 years late, but it’s finally here. It’s a telescope that will undoubtedly change your life. The James Webb Space Telescope (JWST). It’s an observatory in space, 1.5 million km from Earth. For some context, the Moon is only 400,000 km away. It is located at Lagrange point, a gravitationally stable location that allows it to orbit the Sun while staying in line with Earth. Webb has to be this far removed so that it remains out of the Earth’s and the Moon’s shadows, and has an unimpeded view. It can see farther in space and time, thanks to its lens that can “see” infrared light. More on this in a minute.

If we had the time, I would tell you the incredible story about the political manoeuvring that allowed the telescope to be built (one US senator and thousands of schoolteachers were involved), the precise physics behind its positioning and the decades-long engineering work to construct it (if you were to scale the mirror to the size of a continent, the valleys would be as deep as an ankle). I want to instead discuss how this telescope will impact your daily life. From how we communicate across the world to a new era in international cooperation, what we learn from Webb has the potential to change how we live.

Dr Joe P. Ninan at the Tata Institute of Fundamental Research describes this as an “infrared revolution”. When light leaves a star, it carries a certain amount of energy with it. But as light travels through space, it experiences something called “gravitational redshift”. As light travels further from its star it has to escape the gravitational pull, expending much of its energy while doing so. The colour with which we see light depends on its energy. The lower the energy is, the “redder” it appears until we can no longer see the light—it becomes “infrared light”. Now over billions of years of travel, the infrared light reaching Earth is almost invisible. Webb is mounted with some of the most powerful infrared lenses we have invented, allowing it to see clearer than any telescope before it, including Hubble which had very limited infrared capabilities.

Dr Ninan believes that this advanced technology will seep into common household instruments, including those used by your electrician. The net impact will be more efficient diagnosis of malfunctioning machines, and improved accuracy across consumer or capital goods that employ any form of infrared detection. This includes technology employed in medical equipment, where infrared detection is employed everywhere from preventing surgical accidents, to diagnosing brain trauma. The trickle down effect of the advanced infrared technologies developed for Webb has the potential to impact your healthcare costs, the efficacy of your TV remote, and everything in between.

Telescopes, including the inexpensive one gathering dust in my attic, work by gathering and focussing light reflecting and emitting from far off objects. It takes time for this light to get here, so when I turn my telescope towards Saturn, I really see Saturn as it was 1 hour ago. It took light an hour to get to Earth from Saturn.

Webb’s predecessor, the Hubble telescope (launched into space in 1990 and with 5 servicing missions over its 32 years in space, orbiting Earth) can detect light ranging from ultraviolet light (which is visible only from space) and near infrared light. It can “look” more than 13.4 billion lightyears away from Earth. That means, the images it captures are of objects and events in space that happened billions of years ago. The further away you look, the deeper into the past you see.

To explain that, let me start with an analogy.

Think about blowing a balloon. You exert a standard force of air into the balloon with every breath. When the balloon is empty, the force of our breath fills up the balloon quickly. But as the balloon gets larger, the rate at which it expands is slower. Twentieth Century astronomers thought the universe worked along similar lines, with the Big Bang being the first breath into the universe. Hubble’s observations, though, were not in line with this model. They showed us that galaxies were accelerating away from each other. It’s as if the universe was accelerating while expanding. We call the force triggering this acceleration ‘dark energy’.

“Dark energy and dark matter dominate our universe. In fact, visible matter, the stuff we see and interact with, is less than 5% of the total content of the universe,” explains Piyul Mukherjee, who holds a diploma in Astrophysics from the Instucen Trust. “Hubble played a large role in our discovery of dark energy and dark matter. And Webb will take the next step.” 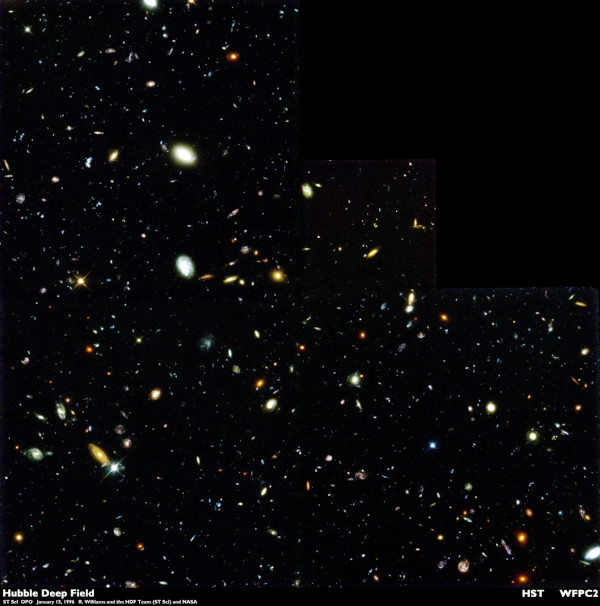 [A comparison of Hubble (above) and Webb’s (below) images of a galaxy cluster. Webb’s image of the cluster, as it appeared 4.6 billion years ago, is overflowing with detail. It shows thousands of galaxies, and for the first time, makes visible the faintest objects ever observed in the infrared. Image credit: NASA, ESA, CSA, STScl] 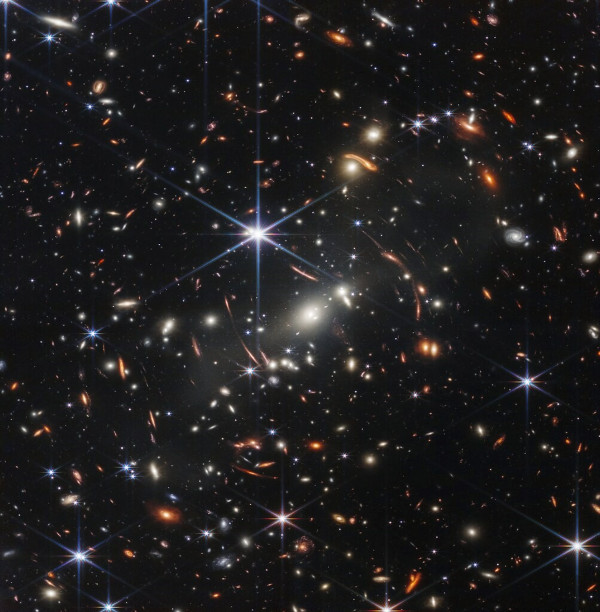 Webb will look farther than Hubble ever did. While the technology that pioneered its development is already seeping into our daily life, the Webb’s greatest potential is in its dark energy explorations. Here’s why:

Webb can see objects 450 million lightyears farther than Hubble. It can see the universe as it was 13.75 billion years ago, before the first stars sputtered into existence. By observing this time, astronomers hope to understand how matter, dark matter and dark energy came to be. We have some ideas but we don’t know if they’re right.

A paradigm shift in science

Learning about this time in the universe’s past may induce a “paradigm shift” in science. The last time we experienced such an event was the movement from Newtonian to Einsteinian physics. Consequently, we have completely revolutionised our energy systems, through the development of nuclear power, our modes of communication through satellite-powered television and radio, and how we share and store information with the advent of the internet. If you choose to buy into the ‘nuclear deterrence theory’, we may even have prevented the outbreak of a third World War by building nuclear weapons. The ‘dark energy’ paradigm shift would have similar consequences.

Dr Ninan spoke about the sunshield on board Webb: “The deflector on board the JWST is itself a major step.” The shield, made of 5 layers of a fibre called Kapton, protects the telescope from heat and radiation from the Sun. This form of protection, pioneered at this scale for Webb, is the next step in cheaply and effectively protecting our satellites from space’s harsh terrain. The benefits of cheaper satellites could well trickle down into lighter prices on communications and information storage.

Webb will undeniably have a positive impact on the technology that we use. Its observations may even lead to the introduction of new forms of technology—ideas and processes that we don’t even know of yet. But one particular aspect Webb may help reignite is a social movement that has faded over the last decade: globalisation.

To begin with, its development is an international partnership between NASA, ESA (European Space Agency) and CSA (Canadian Space Agency). In addition, over 300 universities, organisations, and companies from the US and 14 countries worked on it. Second, there’s a possibility of improved international relations following discovery of extraterrestrial life.

Webb is equipped to observe the atmospheres of exoplanets, planets outside of our solar system. If it can identify significant traces of oxygen on a planet, it may be strong evidence of alien life. Not necessarily complex life, but maybe simple life (microorganisms). Michael Oman-Reagan, an anthropologist who focuses on space exploration and culture, writes that space achievements can change human culture through “the way we perceive our species and planet”.

Mukherjee says, “If we see life in a distant galaxy, maybe that would put our own conflicts into perspective. We can be inspired by life existing so far away.”

No precedent exists for such an event, so there is no way to predict how we might behave, but past discoveries in space have often led to periods of international scientific cooperation and decreased tensions. However, with a rocket crash on the Moon’s surface going unclaimed, perhaps we are witnessing the end of this era of cooperation.

There is much about what Webb might accomplish that is uncertain. This is the reality of science and space exploration. I would be either ignorant or a fool to suggest that any of what I have claimed might be a certainty. But Webb will play an influential role in our understanding of what might just be one universe in a multiverse. Webb will give its attention to hundreds of thousands of celestial objects, many in our own backyard. We may wake one morning to discover that the ingredients for life are readily available on Jupiter’s moon, Europa, and the dream of terraforming Mars will be a silly fantasy of history (I don’t volunteer to tell Elon Musk). Quips aside, I can say with some certainty, the James Webb Space Telescope will change our lives in more ways than one. So tonight, look up and say hi!

Arjun Chaudhuri is a student of Economics and Public Policy at the University of Toronto. He works as a researcher at the Munk School, conducting his own research in public administration in South Asia. He is currently interning at Founding Fuel.