The World in 2022: Events that shaped our world 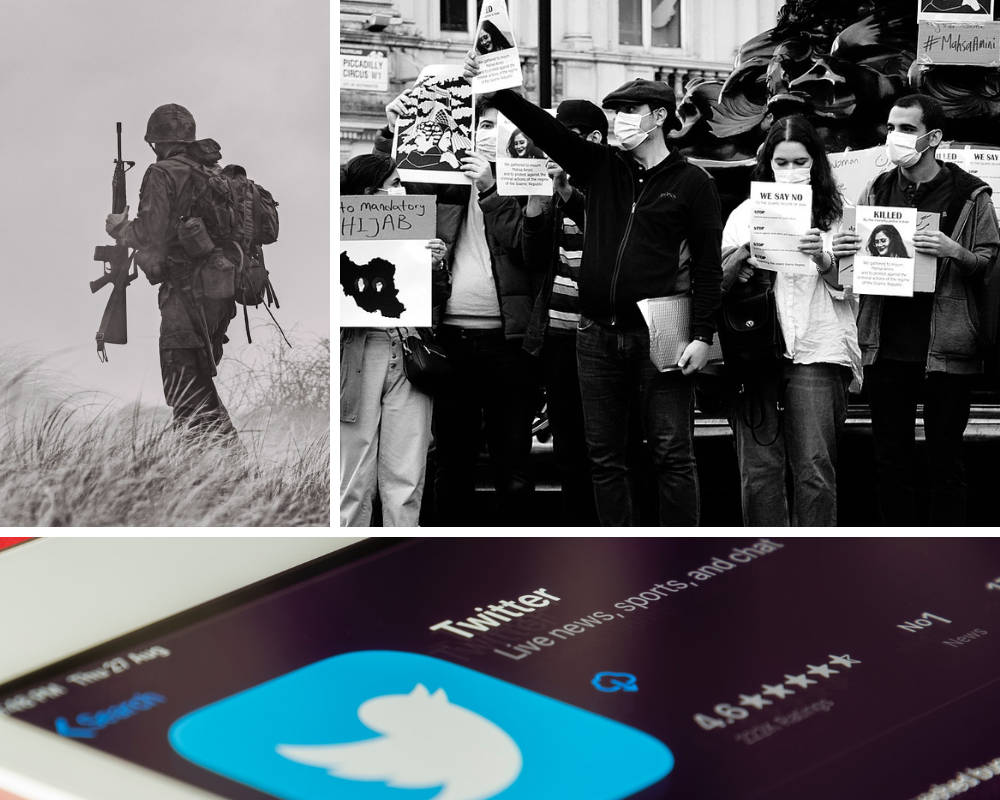 [(Top left and bottom) from Unpsplash; (top right): photo taken at a protest at London's Piccadilly Circus against mandatory hijab in Iran. Photo by Garry Knight from London, England, CC0, via Wikimedia Commons]

As it invariably does, the year had its share of surprises.

This year, geopolitics trumped geoeconomics, statesmanship collapsed in various parts of the world, and it became clear that there's no denying the climate crisis. And for the first time in 10 years the chink in Xi Jiping's armour were visible.

But there were signs of some good coming out of all the conflict too: There are new developments on the green energy front; the fight for gender equality in Iran is inspiring; the Ukraine war has brought to the surface demands from the global South for equity with the North in global governance. And the virtual collapse of FAANG could give startups that create real value a better chance to shine. Not to mention, the fallout of Elon Musk's takeover of Twitter, could be the spark for changes in social media—for it raises vital questions that could define how social media shapes and defines society.

The Rise of Friend-Shoring

In a speech she delivered in Seoul in July, Janet Yellen, the US Treasury Secretary, called for deeper economic engagement between “trusted trading partners”—or what she called friend-shoring. What this means in simple language is that the US wants its allies to trade more between themselves, and thus less with countries such as China and Russia. This marks a radical shift in the nature of globalisation: Geopolitics has trumped geoeconomics.

Impact: Friend-shoring is unlikely to fracture the global system into exclusive trading zones, but it will create barriers in critical industries such as semiconductors, biotechnology, artificial intelligence, green mobility and new forms of energy that are at the heart of the rivalry between the US and China. The interplay between friend-shoring, bilateral free trade agreements and multilateral trading blocs will complicate the global system, putting an end to the open system that came into existence after the collapse of the Soviet Union thirty years ago.

Supply chains will begin to be relocated to different parts of the world. This will create opportunities for countries such as India that are trying to get into the global manufacturing game, though one important precondition is that India chooses to remain a trading nation rather than become a protectionist one. There are risks as well. The move to global supply chains out of China could add to global inflation in case production efficiency is lower in the new locations. The clear preference for more trade between geopolitical allies could also mean persistent pressure on India to choose between the opposing camps, rather than occupy the middle ground as it quite rightly has in the case of Russian oil right now.

China has abruptly reversed its 33-month long zero-covid policy that shut the country off from the outside world even when the rest of the international community restored near normalcy after vaccinating the population. The reversal has happened suddenly, without warning, just one month after Xi Jinping tenaciously defended this policy at the 20th Communist Party Congress.

Impact: This is a globally significant event for three reasons. First, it has exposed the limited capacity of the party-state to sense the public mood despite the use of surveillance technologies deployed in the past decade.

Second, its sudden collapse shows that the party-state is unwilling to risk widespread public anger from coalescing into an anti-party movement, and thus demonstrates the limitations of Xi’s authoritarianism.

Third, the world is likely to see the Chinese leadership as both whimsical in pursuing the zero-Covid policy against global logic as well as having no exit plan, and will hurt China’s international image as a reliable and stable investment and business destination. For the first time in 10 years the chink in Xi’s armour is visible to both the Chinese people and to the international community.

Impact: The collapse of statesmanship has resulted in our world being governed by recklessness, hatred, hostility, incompetence, trust deficit between major powers, and losing focus on economic growth, cooperation, nurture and compassion.

By Sir Graham Watson, former leader of Liberal and Democratic Alliance in the European Parliament

One of the hottest-ever years on record, the first half of 2022 brought a combination of floods and drought caused by climate change, the impacts of which are being accelerated by human behaviour. Russia’s invasion of Ukraine created energy and food challenges, forcing governments to tackle shortages and inflation and slowing global growth. The second half saw the world’s biggest climate negotiations end in a disappointing outcome.

Yet, at the end of the year came two events that may help shape our world in 2023: Scientists in the US announced a nuclear fusion breakthrough in December when their controlled experiment produced more energy than it consumed, for the first time in history. And while it needs a lot more work, the success holds out hope for humanity’s net zero goals by possibly making accessible a powerful clean energy source that doesn’t rely on fossil fuels or emit greenhouse gases. Another important success story came from Chinese scientists who announced a way to produce hydrogen by splitting seawater without desalinating it, creating a commercially exploitable electrolysis device. It is breakthroughs like these which hold out hope against a looming climate crisis.

After years of soaring ever closer to the Sun, the tech titans (plus Twitter) saw the wax on their wings melt in the heat of the changing economy as they plunged back to earth like mythology’s Icharus. These companies, in many ways a creation—or co-creation—of the minds of the South Asian diaspora, have shed nearly $4 trillion in market cap this year. But while they’ve shed some 88,000 jobs this year, tech jobs outside their orbit have grown by more than 200,000, many in “non-tech” sectors. This boon for sectors that create far more value, as the top tech talent now moves to manufacturing, retail, government data initiatives, and most importantly health care, is only beginning.

Implications: While the trauma of job loss, particularly for those dealing with visa issues and for contractors in places such as Bangalore, are not to be dismissed, this is ultimately a huge win for humanity. Mid-sized companies, start-ups in green technology and creative AI, health care, manufacturing, “smart cities”, and many others have fallen short in the data-driven, digital transformation of the economy as the shiny but marginal value creators have dominated the jobs market. Not any more. Look for many new green shoots springing forth from this transition in the firms that will truly transform the world in 2023 and beyond.

By G Venkat Raman, Sinologist and professor at IIM Indore

A 22-year-old Iranian Kurdish woman, Mahsaa Amini, died after her arrest by the authorities in Iran for protesting Iran’s strict hijab dress code for women. In a conservative Iran, it was unfathomable that a challenge would come for the leadership of the Islamic republic from women protesters. The protests have been described as ‘riots’ by the authorities. Moral police inspired by Islamic orthodoxy has described the protests as the biggest challenge to the republic since its establishment in 1979. Mahsaa Amini’s death has sparked a wave of protests by women. The protests have been met with the iron fist of the conservative leadership. Iran carried out its first known execution over the protests of a 23-year-old woman, Mohsen Shekari, for blocking one of the main streets in Teheran and wounding a paramilitary personnel. It is believed that the execution of several other women protesters will follow.

Impact: At a time when the world is dominated by one-upmanship, the eruption of the anti-hijab movement in Iran comes as a whiff of fresh air. The fight against patriarchal hegemony and striving for a just and equal world provides us with optimism and inspires us to fight for a better world. The anti-hijab protests are bound to impact movements around the world for gender justice. In addition, these protests are also bound to inspire the oppressed in other forms of discrimination. The context may be gender-based inequality, but the movement inspires us to not merely crib but strive for a cause we believe in and, most importantly, be ready to pay the price for a better future for our succeeding generations.

The War About and in Ukraine

The cause of the war was a push-back, within the global North, against the post Second World War US hegemonic world order.

It also brought to the surface demands from the global South for equity with the North in global governance.

The juggernaut of capitalist globalisation since the collapse of the Soviet Union in the 1990s has hit a large speed bump: Localisation has become necessary.

An equitable and democratic global architecture is required for governance of data on the internet and also for adaptation to global climate change.

India's assumption of the presidency of G20, following Indonesia, and to be followed by Brazil, has provided a platform for resetting the balance of power in institutions for global governance—WTO, the World Bank, IMF, the UN and Security Council.

The ideology dominating public policy with the “Washington Consensus”: minimum government, privatisation of public services, deregulation of business, and free trade across national boundaries, is being pushed back within the discipline of economics.

At a deeper societal level, individualist consumer values are being challenged by community-based traditional values.

Business can no longer be as usual.

By Vivek Kelkar, co-editor and co-founder, The Cosmopolitan Globalist

After months of legal wrangling and some dithering, Elon Musk completed his $44bn takeover of Twitter on October 28, 2022. He tweeted almost immediately “the bird is freed” and later said “let the good times roll”. He went on to fire the top team immediately and then slashed the employee count by nearly half.

Why it’s significant: It raises vitally substantial questions and may well come to define how social media shapes and defines society over the next few years.

These and other questions were always there since Facebook came about. But they’ve now come into sharper focus since Musk took over Twitter. How Musk answers these questions and how other actors, including users, and government and non-government actors (drawn from a wide section of civil society groups, probably) deal with these questions over the next year, may well come to define the future course of social media as a space for information, news and discourse over the course of the next 12-15 months. To my mind, Musk doesn’t demonstrate the capacity to ask most of these questions, let alone define them. They will be asked and attempts will be made to answer them. Who finally takes the lead may well shape social media tools and their consequences for all of us.