US-China Tech war: The US is weaponizing its global influence

What the US CHIPS and Science Act means for China, the world and India. A podcast with Prof G Venkat Raman 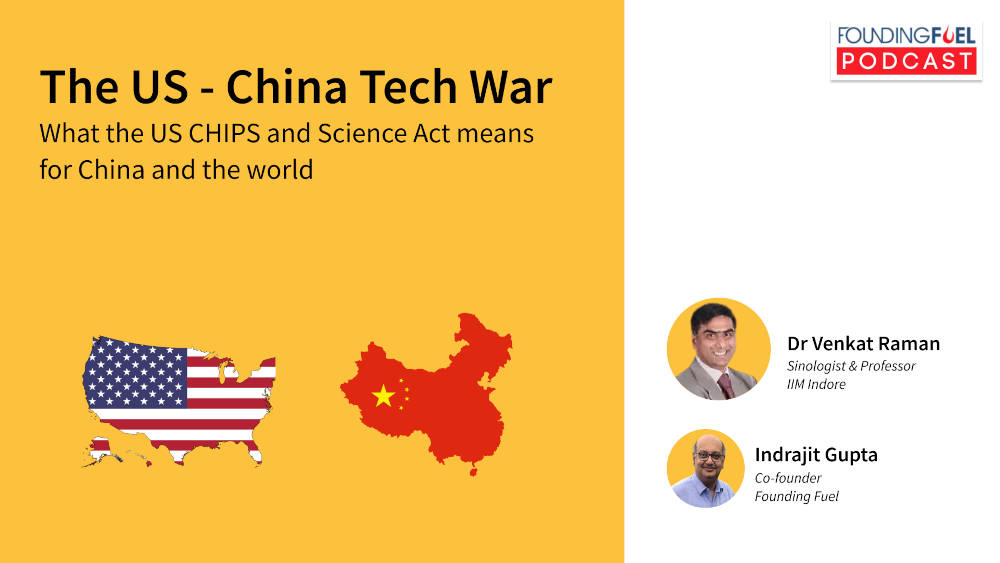 About five weeks ago, the Biden government announced a sweeping set of export controls, including a move to cut China off from certain semiconductor chips made anywhere in the world with US equipment.

This move is the latest chapter in the US-China tech war, aimed at slowing down China’s technological and military advances. It has major implications for global business and for India.

We asked sinologist and professor at IIM Indore, G Venkat Raman, to unpack the many dimensions to this latest US policy thrust. In this podcast series, he talks about

“The ‘foreign product rule’ is a pretty draconian measure that grants US export controls greater extraterritorial reach. This rule primarily applies to US-origin items, but can be extended in scope to cover non-US firms that have used American technology in the process of manufacturing their products. So, the BIS (Bureau of Industry and Security) has forced semiconductor designers and manufacturers in third countries to limit sales to China's tech giants like Huawei.”

“The liberal international economic order which the US crafted—they used that position to weaponize the dependence of the rest of the world… The Americans [have a] deeper sense that China will emerge as a ‘digitally authoritarian state’.”

“America is going all out to contain China, but they cannot do it alone… The world seems to ask America, on one hand you are talking about containing China, but on the other hand, you’re saying America first. What is in it for us if we join hands with you?”

“It might seem that only Chinese firms will be majorly hit—like SMTC or major automobile manufacturers like Geely and BYD. But this is going to have implications for American firms, non-American and non-Chinese firms as well.”

Part 5: What it means for India

“We need to ensure that we are not getting drawn into this tug of war. And we should be in a position to pick and choose for our national security considerations. That means, preparing for tech self-reliance.”

Listen to the full playlist.