Kiran Karnik: Things to read, do, experience, listen to, and ponder over

Karnik shares his favourite sources of inspiration for innovation and entrepreneurship. Part two in a three-part series 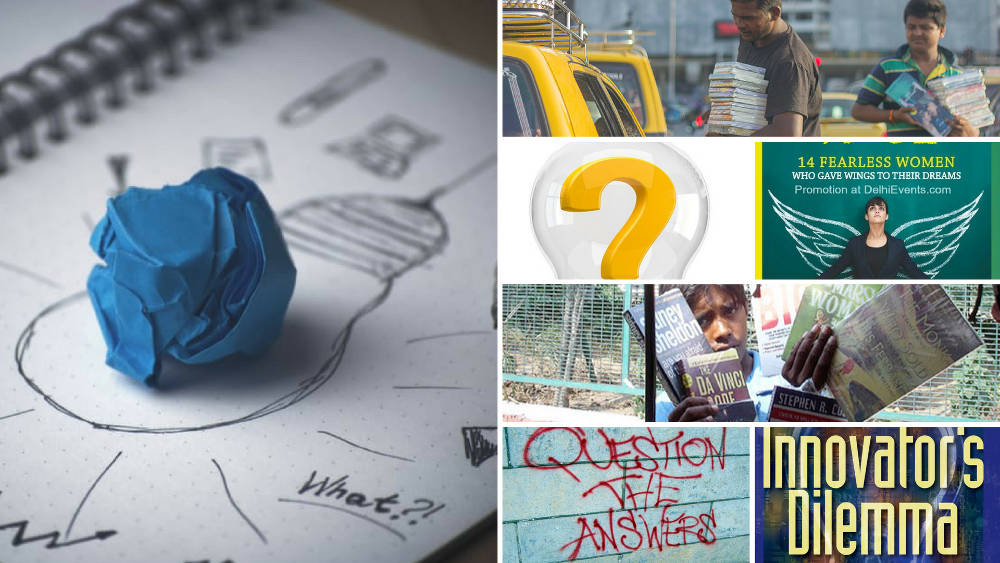 [Photographs via Pexels.com and Thomas Malyska under Creative Commons [CC0 1.0]; by walknboston, Vikramdeep Sidhu from Jhajjar, India (People of Mumbai), via Wikimedia Commons and David Lisbona under (CC BY 2.0). All photographs cropped from original.]

In Part 1 of this series on #MeetTheAuthor, we carried an exclusive extract from Kiran Karnik’s book ‘Crooked Minds: Creating An Innovative Society’, where he talks about how prize-based public competitions are emerging as a smart way to encourage social innovation and technological development.

This is Part 2, where he talks about the things that have caught his attention and inspire him.

In a few days we will engage with him in a conversation around the ideas presented in his book. Stay tuned.

1. Something that anyone involved in innovating must believe in

“You see things, and you say ‘Why?’ But I dream things that never were, and I say ‘Why not?’” (George Bernard Shaw)

This is an old favourite quote, and one whose relevance to change, to idealism and innovation is quite obvious. It’s about going beyond the known and commonplace, and thinking big and different. Indeed, an ideology for innovators.

For me personally, this was best brought alive by three persons whom I had the honour of associating with. The first was Dr. Vikram Sarabhai, who painted a dream of a transformed India and, in effect, said “Why not?” A means to the dream (and, to me, a dream in itself) was changing and professionalising government itself. My half hour interview with him, while graduating from the Indian Institute of Management in Ahmedabad (IIM-A), so fired me up that it led to a career of well over two decades in government!

The second was Dr. V Kurien, who dreamt of transforming rural India through producers’ cooperatives—beginning with milk—that would use the very latest technology. Here was a nuclear scientist (that is what he was!) who settled down in a small town in Gujarat, set up a state-of-the-art dairy with the very latest equipment and not only created Amul, but triggered waves around the world. When I first met him, he shared many of his seemingly impossible dreams and he too asked “Why not?”

The third was Dr. APJ Abdul Kalam, a one-time colleague at the Indian Space Research Organisation. He always had big dreams and thought they could be realised. More importantly, he encouraged others to dream—and to work towards realising these dreams. Interacting with him was not only a pleasure, but a mind-opener. 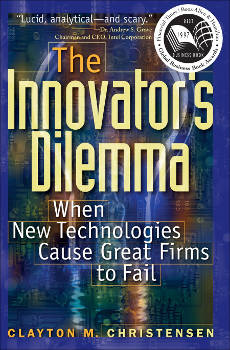 It dates back more than 15 years, but is as relevant today as it was when it was first published. A timeless classic, with the deep, thought-provoking (and data-based) insight that (often) “Doing the right thing, is the wrong thing.” Companies that continued doing what they were doing because they were successful can well end up dead (think Kodak, for example). After all, disruption is about changing the ground rules, and when that happens, past success is no guarantee of even survival.

Another book, more recent and India-specific, is also high on my list for both its lessons and its inspirational character. This is Dare to Be, by Rinku Paul and Puja Singhal. 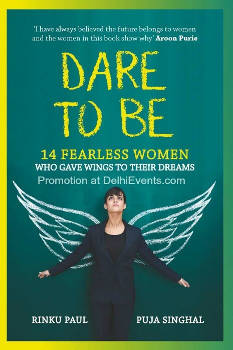 It documents the story of 14 women entrepreneurs who translated their dreams into reality—often giving up safe or potentially lucrative careers to take up an entrepreneurial path. Unlike some other similar books, this is not about “big-name” women, who are dynastic entrepreneurs, but of ordinary women (whose names you did not know and may not, even now, know). This makes them true role models, not only for women, but for all entrepreneurs.

3. One more aphorism, something that is a good philosophy even beyond innovation

In life, and certainly in innovation, knowledge (knowing the answers to questions) is important, but it is essential to keep interrogating “received wisdom”. Change comes by deviating from the given, from questioning what is assumed to be a given, by seeking and striking a new path.

My own belief in this approach really developed while studying at IIM-A. The “case method” is all about asking questions and debating, knowing that there is often no “correct” answer or unique solution. This reinforced my anathema to dogma, to any definitive pronouncements. I guess this came out of studying (and, importantly, imbibing, science) and seeing how established, “proven” theories get displaced by someone who doubts and questions the established order.

These lines from Robert Frost:

‘Two roads diverged in a wood, and I –

I took the one less travelled by,

And that has made all the difference.’

Innovators are necessarily those who take the unbeaten path, the road on which few—if any—have travelled. A willingness to not go with the crowd, to not do what everyone else is doing, must be the guiding light for anyone who wants to be innovative.

These lines first resonated for me because of my liking for poetry, with Frost being a particular favourite. It was only later that I discovered my predilection of going off the beaten route. I guess this was reflected in my (strange!) choice of job after graduating from a business school.

5. Two places to turn on your sharpest observational faculties

The first are traffic signals in most of our big cities, certainly in Delhi and Mumbai. Watch what I have called ‘Stop Signal Salespersons’. Their amazing range of goods (from books to innovative toys) are marketed and sold in the 120 seconds (often even less) between the red light and the green light. Observe their uncanny ability (honed, no doubt, through analysis of data based on the thousands whom they have approached for sale) to pick the most likely buyer. Is it the age, the gender, the type of car, the number of passengers, the demographic of the passengers? What determines their picks of likely buyers? How do they market and clinch the sale in such a short while (including bargaining, collecting cash and returning the change)? Surely, there’s a great deal to learn.

The second place is the Railway station, particularly in any large city. Here you see a microcosm of India, barring possibly the richest 0.5%. Close observation can tell you a great deal about them—potential customers for whatever your venture aims to sell. It also points to problems and issues, and may well stimulate business ideas. In any case, it is a great place for a crash course on India and Indians—necessary for any entrepreneur.

Take Penrose stairs, a staircase that form a continuous loop on which you never get any higher (or lower). It was created by the mathematician Roger Penrose, with his father, Lionel, and converted into a painting by a Dutch artist MC Escher. Such a staircase is impossible in three dimensions, telling you about how limited perspectives may distort reality.

Then there is Salvadore Dali, the surrealist painter who triggers the imagination through his paintings. And, of course, the Italian polymath Leonardo da Vinci, who was an inventor, artist, architect (and everything else!)—a true Renaissance man. His imagination and vision was complemented by his engineering skills. There’s much to learn from all of them. So, next time, do visit any art gallery you can!

I myself used to visit art galleries and museums often, and had the opportunity to see the best ones globally. Sadly, these visits have reduced with time, given work-pressures and other demands. I had no formal introduction to art or artists, and picked up what I could from those who knew more and a great deal from books. I do believe that problem-solving—and certainly creativity or innovation—requires one to have perspectives from different vantage points, drawing from different disciplines. Art, poetry, literature, theatre, films—all contribute, I believe, to the enrichment of one’s perspective. Personally, I also find it more satisfying. The only problem is that when I read a newspaper, I want to read everything: sports, politics, art, science—even gossip!

7. When you want to relax, there’s nothing like a game—but that need not mean non-learning time

In fact, there is much to learn from games: team-work being a major one. I would particularly recommend one game: Clue. For those not familiar with it, this board game involves identifying the murder weapon, the place of the crime, and the murderer, by first guessing and then—based on the responses of fellow players and an analysis of these—proceeding to narrow down the alternatives till you can correctly zoom in on all three unknowns. This requires analytical skills and memory, invaluable assets for any entrepreneur. And, of course, Clue is great fun! 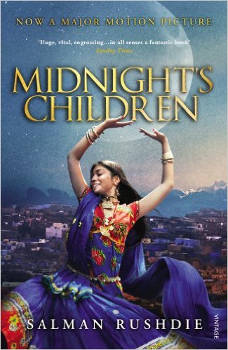 Published in 1981 (before many of you arrived on Planet Earth), this much-acclaimed novel was a milestone of “Indian” writing in English. Its use of magical realism (a genre pioneered by Gabriel Garcia Marquez) and inter-weaving of history and fiction was an innovative/creative means of heightening the impact of the story. There is much to be learned from it about imagining based on fact, on using an existing style to create something new, and packaging the whole in a “consumer-friendly” way.

A special podcast around the ideas in his book 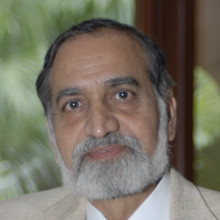 Education needs a new direction to meet the emerging needs of the future
Purpose-Driven Networks: Sustaining large-scale movements of change
Design radical breakthroughs through grand challenges
You might also like