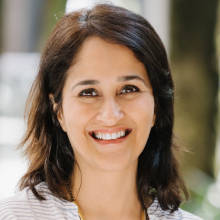 Kiran Bir Sethi is a designer who became a teacher, a principal who grew into an education reformer and subsequently morphed into a social entrepreneur.

After graduating from the National Institute of Design, Ahmedabad (India) in 1989, Kiran successfully ran her own graphic design firm for over a decade. She moved into education when she founded The Riverside School in Ahmedabad in 2001, which is now viewed as a laboratory to prototype “design processes” that enable “transformative” student learning experiences.

Kiran is also the founder of 'aProCh'—an initiative to make our cities more child friendly, for which she was awarded the Ashoka Fellow in 2008. In 2009, she received the “Call to Conscience Award” by the King Centre at Stanford. In 2009, Kiran launched “Design for Change” which uses a simple four-step design framework—FIDS (Feel, Imagine, Do, Share) to cultivate the I CAN mind-set in all children. Today, DFC is the world's largest movement of change—of and by children, and is in 60+ countries, impacting over 2.2 million children and 65,000 teachers.

Over the years, Kiran, Riverside and Design for Change have won several accolades and awards. Some of the most recent ones are:

Kiran resides in Ahmedabad with her Husband Geet Sethi and two wonderful children, their son Raag and daughter Jazz. She loves listening to music, watching movies, singing, dancing and has an insane love for fruit-filled dark chocolate.

Masterclass: Personal Journeys with Parmesh Shahani
The significance of the Bihari
The doughnut and the hole
FF Recommends | Giving: The causes that need your support now
Finding my place in the family business