Neha Singh, co-founder of Tracxn Technologies, talks about why she chose to be a generalist despite her techie credentials; how the startup ecosystem is evolving in India; and what founders ought to know about venture capitalists

Neha Singh is a computer science silver medallist from IIT-Bombay. She started her career as a management consultant (with Boston Consulting Group), moved on to become a venture capitalist (with Sequoia Capital), and finally co-founded her own company.

She is currently building and scaling a leading data analytics startup that tracks every other startup in the world. Think of her company, Tracxn as the Bloomberg for private market companies.

The idea was born out of her own pain point as a venture capitalist trying to source and build a pipeline of startups. Tracxn helps private market investors look for good startups to invest in, by providing a database covering over 1 million companies. It provides information on startups across 1,000 emerging tech sectors to over 8,000 clients across India, the US, the Middle East, South-East Asia and Europe.

I enjoyed diving deeper into her rich entrepreneurial journey and learning more about:

“I was very glued into technology… [but] what excited me most was to have an impact using the business side of technology. Starting as a generalist, seeing more industries—that seemed like the most interesting aspect to begin with.”

Neha often says being a “VC who can code” is a rare skill set that’s been invaluable in her success. Academically trained in computer science, she started her career as a generalist management consultant at BCG, followed by a stint as a venture capitalist at Sequoia Capital. Both these experiences laid the bedrock for building the variety of exposure and skills that one needs to succeed as an entrepreneur.

Entrepreneurs are jacks-of-all-trades, not specialists. As an entrepreneur, she says, “you are put in a pond and you have to figure out everything. In a corporate you are in a shell. You know what you need to do to get to the next level. In a startup, you also have to know about 10 different things.”

Building a global company out of India

“We launched two products—one is for $100 and the other for $5,000 a month. There were more takers for the $5,000/month product because people wanted enterprise grade data.”

Building their team of analysts and product developers wasn’t a challenge given India has been a back office for a lot of data companies. So, India, and Bangalore in particular, has a good talent pool.

Their biggest criteria while hiring a product developer is problem-solving ability. She says, their product is a new platform, there’s nothing else that’s similar that they can refer to. The developer therefore also needs customer empathy (understand their work flow) and of course, attention to detail.

On the business side, customers need enterprise grade data and are willing to pay for it. For them price doesn't matter, they need actionable data, Neha says. In fact, they found more takers for their higher priced module. And that’s true for their Indian clients as well (at least in their segment, which is private market investors, and large corporates).

What has helped them increase penetration is an ability to get into their clients’ daily work flow, start with one pain point at a time—and keep building workflow modules. And then have a good support team, she adds.

They’ve also started offering clients personalisation in the product. Say, if someone wants to track health-tech or social impact startups, they personalise it to make it easy for them to track companies, sectors, and trends globally.

Investors look for a mix of tangible and intangible qualities

“When I’m looking for companies to invest in, I typically look at the ‘market’ as the first thing (is it a large market, is it a growing market, is it a trend that is going to accelerate?) The second thing would be the team (which has more subtle aspects).”

How deeply did the founder connect with the problem they were trying to solve, how desperate were they to solve it and, and grit—these were the essential ingredients that Neha, the investor, looked for in a founder.

Do venture capitalists back founders with impeccable academic and professional pedigree? She says that is changing as the ecosystem evolves. Earlier people from top colleges had access to better capital, networks, etc; now, deep sectoral expertise of the market you operate in will get you noticed by VCs.

Founders should do their due diligence before picking an investor

“Earlier, you (a VC) could sit on a term sheet for 3-4 months. It used to be more of a VC’s market. Right now, it has completely changed. It is more of a founder’s market… the power equation has changed in a good way.”

Having raised over $15 million in funding over multiple rounds, Neha says she looks for an investor who, as a board member, can give input on strategy. And has a connect with the market and a view on how it will evolve—that helps as you build your company.

She also insists that founders do a reference check with other companies the VC has invested in.

And rather than approaching an investor when you are looking for funding, keep talking to investors. That way, when you approach them to raise funds, you are not meeting them for the first time—they would already know you.

First-time founders, Neha says, shouldn’t lose sight of how much of their own company they own after raising multiple rounds of funding. For example, she believes that anything more than a 10-15% dilution in a seed round would raise eyebrows among investors in subsequent rounds and would not necessarily be advantageous to building the company.

Thriving in the evolving workforce demands ‘hustle fuel’. It demands having to punch above

one’s weight to earn a seat at the table—not because you are a woman but because you are the right person for the job. Interestingly, it just so happens that this hustle fuel is precisely the attitude any entrepreneur needs to survive. Whether a man, woman, or from an ethnic minority community. 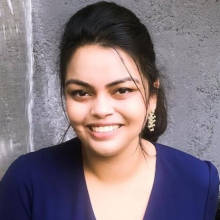 An edtech entrepreneur’s learning journey
Negotiate—because you’re worth it
The human intelligence behind intelligent machines
Reinventing girlhood, one block at a time
You might also like